I would like to take a look at Canada's power usage and where it comes from.  According to http://www.centreforenergy.com/ Canada's Total Electricity usage was 549 TW-h in 2009. 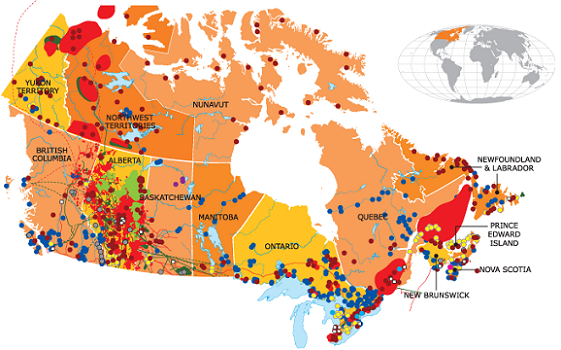 A total of  125 TW-h or 22% of Canada's Electricity consumption was generated from 136 petroleum fired plants,  114 natural gas fired plants, 22 Coal fired plants, and 33 biomass (wood scraps, etc.) fired plants.  This means that a total of 22% of Canada's energy usage is provided from non-renewable energy source.  According to http://www.electricity.ca/ in 2008 16.1% or 118 of Canada's 734 Mega tonnes of Greenhouse Gas (GHG).  This means roughly that Canada's 22% non-renewable electricity sources are mostly responsible for 16.1% of Canada's total GHG.  That is almost a 1 to 1 ratio.  The impact of our fuel based energy sources does not stop there.  We have to obtain the fuel from the earth, and this most likely means that it will be mined.  In 2001 oil and coal production accounted for another 7.5% of GHG in Canada according to http://www.statcan.gc.ca/pub/16-201-x/16-201-x2004000-eng.pdf. So by using a a non-renewable source of electricity we increase the impact since you have continually mine for your energy.﻿﻿
﻿﻿﻿﻿﻿﻿﻿﻿ ﻿﻿﻿﻿

﻿﻿﻿﻿﻿﻿﻿
﻿﻿
﻿﻿ ﻿﻿﻿﻿﻿﻿   A total of  82 TW-h or 15% of Canada's electricity consumption was generated from 5 nuclear plants, with 95% of Canada's nuclear power being generated in Ontario.  Nuclear is better source of energy in terms of emissions, as nuclear plants do not have any emissions except for steam.  However nuclear power has the same problem as fossil fuel plants in that its fuel needs to be continually mined from the earth, and thus nuclear power does have a substantial impact on our environment.  Nuclear power also has a with the disposal of its radioactive waste which is poisonous and lasts for several decades before it becomes stable again.  Nuclear waste most often is stored in large cement bunkers deep in the earth.

﻿﻿
﻿﻿ A whopping total of  362.9 TW-h or 63% of Canada's electricity consumption was generated from 426 hydro plants, with 90% of Manitoba's, Quebec's, B.C.'s, and Newfoundland's power needs being generated from Hydro.  Hydro is good in that it generates very little emissions once the infrastructure is in place.  However Hydro power generates vast amounts of emissions during its construction as it requires massive dams and earth movements.  Hydro dams also have major environmental impacts, due to the flooding of ecosystems, and disruption of animals habitats once operational.  The good and bad news is that Canada has built up the majority of its hydro potential.

A total of  1.6 TW-h or 0.28% of Canada's electricity consumption was generated from 109 wind farms, and a total of  0.03 TW-h or 0.01% was generated from 1 tidal plant in the maritime.  Wind and tidal power are good in that they both generate very little emissions once the infrastructure is in place.  Wind and tidal plants get their power sources for next to free once operational.  Tidal power is very consistent since it is dependent on the moon, and that isn't doing anywhere soon.   However like Hydro plants, tidal plants require massive infrastructure and thus release vast GHG emissions during construction.  Wind is not the most consistent source as it can die down at times, thus eliminating your power generation at times.  Due to the inconsistency of wind and our current technology farms are limited to locations with high winds.  Wind and tidal power both also have impacts of the local animals living in the region, as wind turbines kill countless birds every year, and tidal plants impact marine life.
﻿


﻿
Well that's it, those are all of Canada's electricity sources.  I am sure you have noticed the glaring exclusion...where is Canada's solar power?  Canada does not have any solar plants, yet we have more potential than Solar power giants such as Germany.  As the below figure shows the majority of Canada's land mass has at least 1000 kWh solar capacity.  Solar is the ultimate renewable source, it does not have any emissions during operation as it comes from our Sun, and our Sun isn't going anywhere for another billion years.  Solar power does not have any major impacts towards animals or ecosystems, does not have major infrastructure needs, and thus does not produce a large amount of emissions during construction compared to other sources.   Solar power does have the drawback of losing power generation during cloudy days or at night, however if we develop ways to store energy these challenges can be overcome.
﻿
﻿ The below image depicts how much land mass would be needed to provide enough energy for the world.  With our current technology you would only need 16, 000 km2, or 0.01% of the Earth's 148,939,100 km2 total land surface area.﻿
﻿

Canada really needs to step up its game and eliminate the 22% non-renewable energy sources with solar and other alternatives, especially solar.
Posted by Engineer on the Bus at 8:45 PM

Engineer on the Bus
I am a recent Mechanical Engineering Graduate that has a strong passion for sustainable practices.